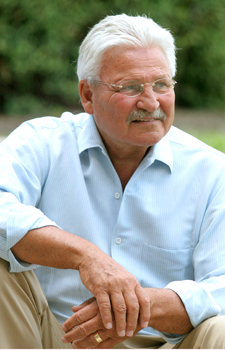 Not long before his death, Robert E. Webber spent seven months of 2006 working collaboratively with over 300 theologians and other leaders to craft A Call to an Ancient Evangelical Future. The Call continues some themes and expands upon the “Chicago Call” of 1977, and sets forth a vision for an Ancient-Future faith in a postmodern world. That Webber helped to craft such a call is not unusual, for he spent the whole of his professional life calling the church to continual reform and, most especially, encouraging leaders and laity alike to drink from the refreshing well of ancient truth. That the Call came, as it did, at a time of great change in the world and in the church, and that it also came just before his passing, gives it a kind of weight that makes it especially compelling to examine.

The theologians who participated represented a broad diversity of denominational affiliation and the Call’s listing of editors and members of the board of reference was remarkable in its scope and depth. Most encouraging was that hundreds of pastors, theologians, and lay persons across the U.S., Canada, and the world signed the Call before the organization that originally posted the document ceased operations.

Now, Epiclesis is proud to host and champion the Call and encourages visitors here to read it and commend it to others, especially leaders in the church, adding to a growing number of like-minded people across the globe who have done the same.

In every age the Holy Spirit calls the Church to examine its faithfulness to God’s revelation in Jesus Christ, authoritatively recorded in Scripture and handed down through the Church. Thus, while we affirm the global strength and vitality of worldwide Evangelicalism in our day, we believe the North American expression of Evangelicalism needs to be especially sensitive to the new external and internal challenges facing God’s people.

These external challenges include the current cultural milieu and the resurgence of religious and political ideologies. The internal challenges include Evangelical accommodation to civil religion, rationalism, privatism and pragmatism. In light of these challenges, we call Evangelicals to strengthen their witness through a recovery of the faith articulated by the consensus of the ancient Church and its guardians in the traditions of Eastern Orthodoxy, Roman Catholicism, the Protestant Reformation and the Evangelical awakenings. Ancient Christians faced a world of paganism, Gnosticism and political domination. In the face of heresy and persecution, they understood history through Israel’s story, culminating in the death and resurrection of Jesus and the coming of God’s Kingdom.

Today, as in the ancient era, the Church is confronted by a host of master narratives that contradict and compete with the gospel. The pressing question is: who gets to narrate the world? The Call to an Ancient Evangelical Future challenges Evangelical Christians to restore the priority of the divinely inspired biblical story of God’s acts in history. The narrative of God’s Kingdom holds eternal implications for the mission of the Church, its theological reflection, its public ministries of worship and spirituality and its life in the world. By engaging these themes, we believe the Church will be strengthened to address the issues of our day.

1. ON THE PRIMACY OF THE BIBLICAL NARRATIVE

We call for a return to the priority of the divinely authorized canonical story of the Triune God. This story-Creation, Incarnation, and Re-creation-was effected by Christ’s recapitulation of human history and summarized by the early Church in its Rules of Faith. The gospel-formed content of these Rules served as the key to the interpretation of Scripture and its critique of contemporary culture, and thus shaped the church’s pastoral ministry. Today, we call Evangelicals to turn away from modern theological methods that reduce the gospel to mere propositions, and from contemporary pastoral ministries so compatible with culture that they camouflage God’s story or empty it of its cosmic and redemptive meaning. In a world of competing stories, we call Evangelicals to recover the truth of God’s word as the story of the world, and to make it the centerpiece of Evangelical life.

2. ON THE CHURCH, THE CONTINUATION OF GOD’S NARRATIVE

3. ON THE CHURCH’S THEOLOGICAL REFLECTION ON GOD’S NARRATIVE

We call for the Church’s reflection to remain anchored in the Scriptures in continuity with the theological interpretation learned from the early Fathers. Thus, we call Evangelicals to turn away from methods that separate theological reflection from the common traditions of the Church. These modern methods compartmentalize God’s story by analyzing its separate parts, while ignoring God’s entire redemptive work as recapitulated in Christ. Anti-historical attitudes also disregard the common biblical and theological legacy of the ancient Church. Such disregard ignores the hermeneutical value of the Church’s ecumenical creeds. This reduces God’s story of the world to one of many competing theologies and impairs the unified witness of the Church to God’s plan for the history of the world. Therefore, we call Evangelicals to unity in “the tradition that has been believed everywhere, always and by all,” as well as to humility and charity in their various Protestant traditions.

4. ON THE CHURCH’S WORSHIP AS TELLING AND ENACTING GOD’S NARRATIVE

We call for public worship that sings, preaches and enacts God’s story. We call for a renewed consideration of how God ministers to us in baptism, Eucharist, confession, the laying on of hands, marriage, healing and through the charisms of the Spirit, for these actions shape our lives and signify the meaning of the world. Thus, we call Evangelicals to turn away from forms of worship that focus on God as a mere object of the intellect or that assert the self as the source of worship. Such worship has resulted in lecture-oriented, music-driven, performance-centered and program-controlled models that do not adequately proclaim God’s cosmic redemption. Therefore, we call Evangelicals to recover the historic substance of worship of Word and Table and to attend to the Christian year, which marks time according to God’s saving acts.

5. ON SPIRITUAL FORMATION IN THE CHURCH AS EMBODIMENT OF GOD’S NARRATIVE

We call for a catechetical spiritual formation of the people of God that is based firmly on a Trinitarian biblical narrative. We are concerned when spirituality is separated from the story of God and baptism into the life of Christ and his Body. Spirituality, made independent from God’s story, is often characterized by legalism, mere intellectual knowledge, an overly therapeutic culture, New Age Gnosticism, a dualistic rejection of this world and a narcissistic preoccupation with one’s own experience. These false spiritualities are inadequate for the challenges we face in today’s world. Therefore, we call Evangelicals to return to a historic spirituality like that taught and practiced in the ancient catechumenate.

6. ON THE CHURCH’S EMBODIED LIFE IN THE WORLD

We call for a cruciform holiness and commitment to God’s mission in the world. This embodied holiness affirms life, biblical morality and appropriate self-denial. It calls us to be faithful stewards of the created order and bold prophets to our contemporary culture. Thus, we call Evangelicals to intensify their prophetic voice against forms of indifference to God’s gift of life, economic and political injustice, ecological insensitivity and the failure to champion the poor and marginalized. Too often we have failed to stand prophetically against the culture’s captivity to racism, consumerism, political correctness, civil religion, sexism, ethical relativism, violence and the culture of death. These failures have muted the voice of Christ to the world through his Church and detract from God’s story of the world, which the Church is collectively to embody. Therefore, we call the Church to recover its counter-cultural mission to the world.

In sum, we call Evangelicals to recover the conviction that God’s story shapes the mission of the Church to bear witness to God’s Kingdom and to inform the spiritual foundations of civilization. We set forth this Call as an ongoing, open-ended conversation. We are aware that we have our blind spots and weaknesses. Therefore, we encourage Evangelicals to engage this Call within educational centers, denominations and local churches through publications and conferences.

We pray that we can move with intention to proclaim a loving, transcendent, triune God who has become involved in our history. In line with Scripture, creed and tradition, it is our deepest desire to embody God’s purposes in the mission of the Church through our theological reflection, our worship, our spirituality and our life in the world, all the while proclaiming that Jesus is Lord over all creation.

This Call is issued in the spirit of sic et non; therefore those who affix their names to this Call need not agree with all its content. Rather, its consensus is that these are issues to be discussed in the tradition of semper reformanda as the church faces the new challenges of our time. Over a period of seven months, more than 300 persons have participated via e-mail to write The Call. These men and women represent a broad diversity of ethnicity and denominational affiliation. The four theologians who most consistently interacted with the development of The Call have been named as Theological Editors. The Board of Reference was given the special assignment of overall approval.

Permission is granted to reproduce The Call in unaltered form with proper citation.

Keep up to date with Epiclesis news and events. Sign up here to receive our e-Newsletter.